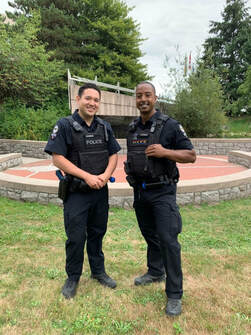 September 3, 2020.  Two STPS recruits are set to graduate from the Justice Institute of British Columbia (JIBC) this month.  These two new officers, Constable Kawano and Constable English, will complete their 3rd block of training at the facility and will soon begin their professional police careers with the STPS.  Our officers start off either as experienced officers or as graduates of the JIBC.  They are appointed under the Police Act. It is a challenging and rewarding career.  The STPS members and staff are proud and respectful of the heritage, culture and traditions of the St'at'imc Nation.  They are dedicated to working  in partnership with the communities to ensure safety and security for all the people.  When you see these graduates on the job please extend them a warm welcome into our communities.  Constable Kawano will be working out of the Lillooet, BC detachment and Constable English will be stationed at the Mount Currie, BC detachment. Congratulations to the two officers!​ 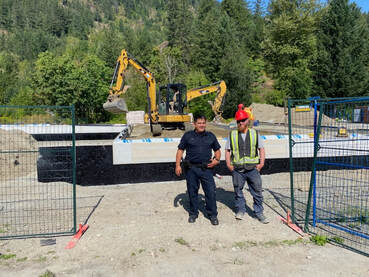 August 17, 2020.  A new STPS Mount Currie detachment building is underway in Lil'wat Nation.  This project has been in the works since early 2019.  By June 2020 the idea had progressed to architectural design plans.  Currently, the foundation has been poured with plans to have the entire building complete by May 2021.  Murphy Construction was chosen as the General Contractor following their successful construction of the T'szil Learning Centre.  The facility will meet both national and provincial building code standards.  Furthermore, it will satisfy BC Energy  Step Code 3 where energy performance can be expected to be 20% more efficient than the current BC Building Code requirements.

Welcome back to the STPS Board, Chief Dean Nelson... 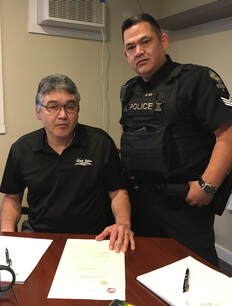 ​Sergeant Michael Leo has served as an Officer for the STPS for over 30 years, dedicating his efforts to the southern communities of N'Quatqua, Skatin, Samahquam, Xa'xtsa and Lil'wat Nation.

Congratulations to the Justice Institute of British Columbia (JIBC) Police Academy Graduates of 2019...

​Officer Chelsea JOHN received his Police Studies Certificate on November 1, 2019 with over fifty other recruits.  He was chosen to represent Recruit Class 159 as valedictorian and delivered the graduation speech to the public and to his fellow graduating police officers at the JIBC ceremony.  The Police Academy trains recruits who have applied and been selected by individual Municipal Police Departments.

​T​he Stl'atl'imx Tribal Police Service has welcomed a new member on board at the Lillooet Office. Constable Chelsea John is from Ts'kw'aylaxw near Pavilion BC.  He has completed his training at the Justice Institute of British Columbia and is now working full time in Lillooet for the STPS.

Are you interested in becoming a member of the Stl'atl'imx Tribal Police Service?
Click here for an application.