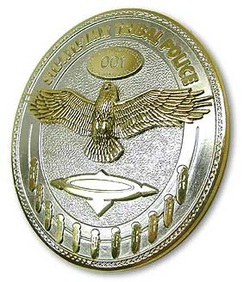 o  You wonder why he pulled you over and gave you a ticket for speeding - He just worked at an accident where people died because they were going too fast.

o  You wonder why that cop was so mean - He just finished working a case where a drunk driver killed a child.

o  You drink hot coffee to stay awake - The cold rain in the middle of the night keeps him awake.

o  You make sure you're cell phone is in your pocket before you leave the house - He makes sure his gun is clean and fully loaded and his vest is tight.

o You talk trash about your 'buddies' that aren't with you - He watches his buddy get shot and wounded in front of him.

o  You complain about how hot it is - He wears fifty pounds of gear and a bullet proof vest in July and still runs around chasing crack heads.

o You get out of bed in the morning and take your time getting ready - He gets called out of bed at 2 am after working 12 hours and has to be into work A.S.A.P. for a homicide.

o You're angry because your class ran 5 minutes over - His shift ended 4 hours ago and there's no end in sight.

o  You call your girlfriend and set a date for tonight - He can't make any plans because on his off days he still gets called back into work.

o  You yell and scream at the squad car that just passed you because they slowed you down - He's in the driver seat of the squad car, going to cut somebody out of their wrecked vehicle.

o  You criticize your police department and say they're never there quick enough - He blasts the siren while the person in front of him refuses to move while talking on their cell phone.

o  You hear the jokes about fallen officers and say they should have known better - He is a hero and runs into situations when everyone else is running away in order to  make sure no gets hurt or loses his life doing it.

o  You sit there and judge him, saying that it's a waste of money to have them around - Yet as soon as you need help he is there.